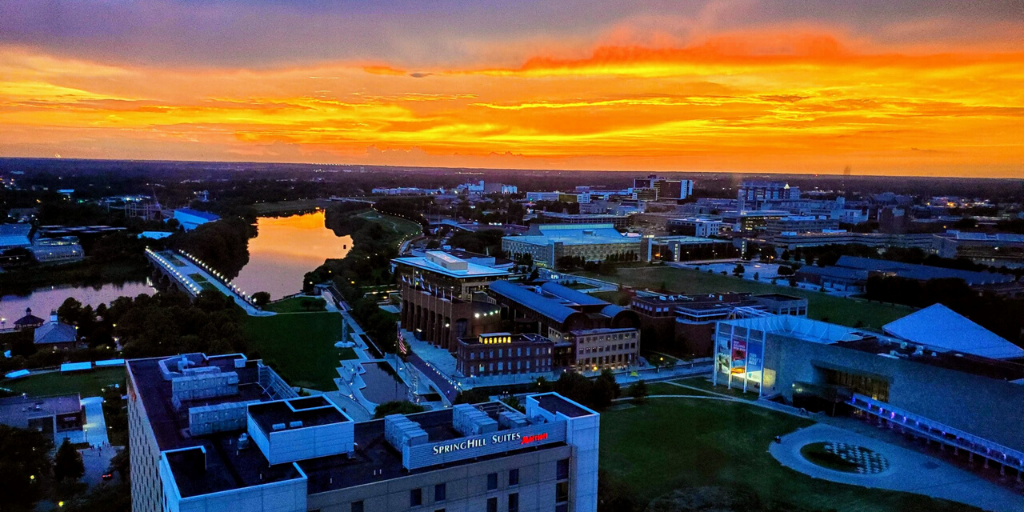 We took a trip to Indianapolis, or Indy as it’s commonly known, last 4th of July. What we really enjoyed about this trip is that downtown Indy is small enough to be easily walkable, but big enough that there were plenty of things to do for the couple of days we were in town. If you’re planning to visit Indy, here’s an overview of what you can do in the downtown area.

We started our stroll through downtown in the western part of the city near the White River. We began by walking along the man-made Central Canal, and continued by walking east to Indiana’s State House.

From there, we took Market Street to the Soldiers/Sailors Monument. The plaza around this 284 ft (86 m) high Soldiers/Sailors Monument has a very European feel to it, which was an interesting surprise in this midwestern city. You can visit the observation deck, which is 231 ft high, by either climbing 330 steps at no charge, or by riding an elevator for a small fee.

Continuing on Market Street you will eventually reach City Market, a popular food hall featuring lots of local vendors. In the summer, there are a couple of Bocce courts set up outside of City Market that are free to use. We enjoyed playing a few rounds despite the unrelenting summer heat.

Further down on Market Street, we walked another half mile to Sun King Brewery. The walk takes roughly 10 minutes and is an easy, flat walk. Sun King Brewery has an extensive line-up of beers — we especially enjoyed the barrel aged reserve beers. Within the brewery, the OCA stand offers a small menu of food for purchase.

Other Things to do in Downtown Indy

You can catch a minor league baseball game at Victory Field, right in downtown, between April and the beginning of September. Victory Field is home to the Indianapolis Indians, the AAA baseball team of the Pittsburgh Pirates.

In addition to the attractions mentioned above, there are several more sights to explore in the downtown area including the NCAA Hall of Fame, Lucas Oil Stadium (home of the NFL team Indianapolis Colts), Indiana State Museum, and Eiteljorg Museum.

If you have a car and are spending a few days in Indy, there are a couple of notable attractions outside of the downtown arrera. The Indianapolis Motor Speedway Museum, nicknamed the Racing Capital of the World, is located 5 miles west of downtown on the infield of the Speedway. The museum displays race cars from the past to the present, including the first car winning the Indianapolis 500 in 1911. For an additional fee, you can also take a bus tour around the race track.

Newfields is an art museum with an extensive park plus Lilly House, a historic mansion. Located 6.5 miles north of downtown, Newfields is also home to a seasonal beer garden, open from April to October.

Have you ever visited Indy? What did you do when you were there?

How to Take Advantage of Visa Free Transit to China

One Day in Madrid: City Highlights