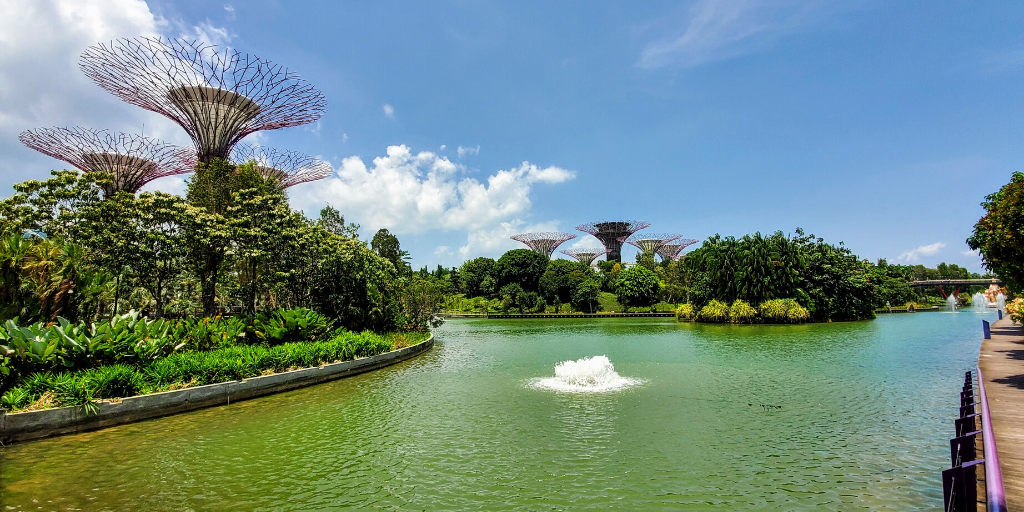 Singapore is an exciting place to visit with no shortage of things to see, do, and eat. And although the heat and humidity was downright overwhelming at times, we thoroughly enjoyed our visit there earlier this year. It’s a clean and generally inviting place that’s home to some of the best attractions we’ve seen on any of our travels.

If you’re looking to plan a trip, check out this list we’ve assembled with some of the best attractions in Singapore.

Visiting the Best Attractions in Singapore

Getting around in Singapore is very easy. It has a clean, reliable, and safe subway system that is relatively inexpensive (aka nothing like the system we’re used to here in Boston). We recommend using a contactless Visa or Mastercard to tap-in and tap-out of the payment terminals for the subway. This way, you don’t have to deal with day passes or obtaining a smart card. As always when travelling internationally, make sure you are using a credit card without a foreign transaction fee to avoid unnecessary extra costs.

Gardens by the Bay

Gardens by the Bay are probably one of the most well-known sights in Singapore because of the giant Supertree Grove. The Gardens, which are free to enter, are actually home to a number of other great attractions including some art sculptures, lakes, and outdoor gardens. The Flower Dome and Cloud Forest within the Gardens both have an admission fee but are worth checking out (particularly on a hot day as both attractions are air conditioned. In the Cloud Forest you will encounter the world’s tallest indoor waterfall at 98 feet (30m).

Singapore has some spectacular light and music shows that are free to watch. There is the  Spectra light show at the Marina Bay Sands (which is reminiscent of the light and water show at the Bellagio in Las Vegas–but much, much grander) as well as the Garden Rhapsody at the Supertree Grove.

We ended up seeing both shows in one night. If you’d like to do the same, we recommend the following schedule: Check out the Spectra light show at the Marina Bay Sands at 8pm and then head to the Gardens by the Bay Supertree Grove for the 8:45pm show.

Singapore is famous for its hawker centres, which are basically large food courts with stalls around the perimeter serving everything from full meals to snacks and drinks. You will usually find a selection of local dishes as well as flavors from across the world, including Chinese, Malay, Indian, and Western. We visited Maxwell Food Centre in Chinatown that is known for its chicken rice and dim sum.

The best known hawker stall at Maxwell Food Centre is easily Tian Tian Hainanese Chicken Rice, made famous by Chef Anthony Bourdain. You’ll be able to pick it out right away from the long line that wraps around the corner. Alternatively, however, we recommend checking out Ah Tai Chicken Rice, three stalls down from Tian Tian. Ah Tai is operated by Tian Tian’s former chef — and the chicken rice was delicious there as well.

There are plenty of places to shop in Singapore, but the most famous is Orchard Road. This is the main shopping street in Singapore and is home to everything from designer stores to more local boutiques.

Singapore Botanic Gardens, a UNESCO World Heritage Site since 2015, are free to enter and open daily from 5 am to 12 midnight. There is, however, a fee to enter the National Orchid Garden. We found it to be worth it to pay for the National Orchid Garden as the displays were beautiful. We also enjoyed the SPH Walk of Giants, an elevated boardwalk that sits at a height of 26 feet (8m) through a tropical rain forest.

To visit the beaches, take the Sentosa Express to Beach Station and then walk 10 minutes to Palawan Beach. From the beach you can also reach Palawan Island and the Southernmost Point of Continental Asia via a wooden suspension bridge.

On your way in or out of Singapore, don’t forget to checkout the Jewel, a destination area with gardens, attractions, retail, dining, and even adjacent hotel facilities. The primary feature of the Jewel is the Rain Vortex, where water flows 40 meters (131 feet) from the ceiling down into the basement in the center of the facility. Since the Jewel is landside, you can visit without going through airport security.

If you’ve ever been to the area, what do you think are the best attractions in Singapore? Let us know what we’ve missed in the comments.

The 7 Best Areas to Visit in San Diego

How to Plan an Edinburgh Day Trip

3 Free Things to Do in London