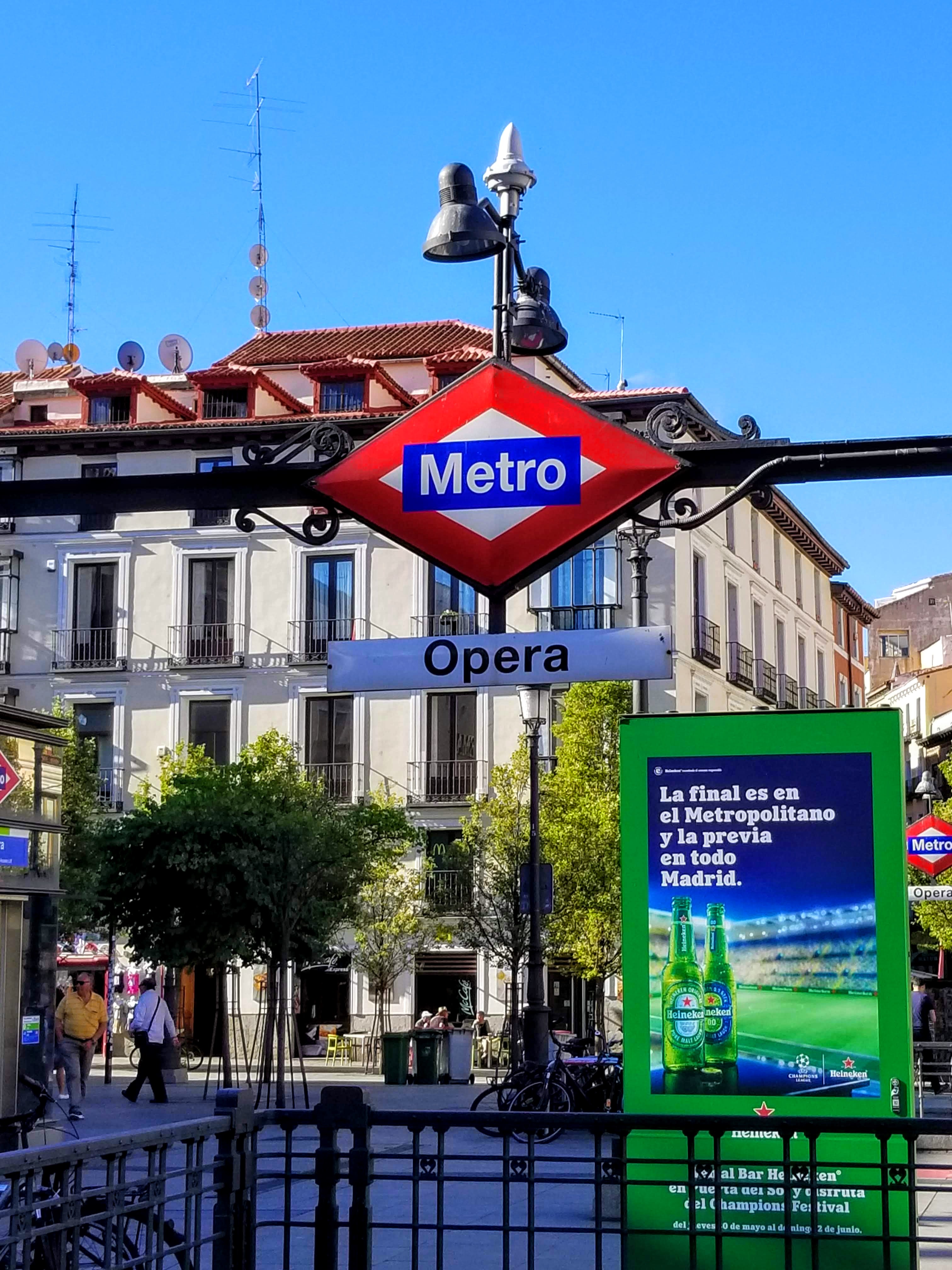 On a recent trip to visit family in Germany, we stopped in Madrid for short period of time after checking out Barcelona and before continuing on. Because of our flight times, we really only had one full day in Madrid — but that’s plenty of time to squeeze in some great highlights of this city.

Madrid is easy to navigate thanks to its Metro system (which, like most European public transit systems, makes the US seem woefully inadequate). If you are arriving by plane and planning on taking the Metro into the center, the ride will take about 50 minutes. Tourist tickets for the Metro are reasonably priced and also include the extra airport charge (similar to the Metro in Barcelona).

To visit the Royal Palace of Madrid, take the Metro and get off at the Opera Metro stop. When you first get off the metro you can get a glimpse of the Teatro Real that you will pass on your way to the palace. Like most other tourist attractions, it helps to order the tickets for the Royal Palace in advance and reserve a time slot for the early morning. This way, you can avoid the heaviest crowds and standing in the long ticket line — and will leave you with enough time to explore more of the city afterwards.

The Palace is the official residence of the Spanish Royal Family at the city of Madrid, although now only used for state ceremonies. It is the largest functioning Royal Palace and the largest by floor area in Europe. The Royal Family generally resides at the Palace of Zarzuela on the outskirts of Madrid.

Before lining up to go through security to enter the Palace, make sure you are not missing the Catedral de la Almudena that sits right across from the Palace. The cathedral is also the seat of the Archbishop of Madrid.

Changing of the Guard

We often joke that if there’s a Changing of the Guard ceremony somewhere in a country we are visiting, Daniel will make sure we see it. Someday we should make a list of all the ceremonies we have seen. 🙂

If you want to check out the Changing of the Guard ceremony in Madrid, make sure to visit the Royal Palace on a Wednesday. The ceremony takes place every 30 minutes from 11 AM until 2 PM at the Puerta del Príncipe (Calle Bailén).

Madrid’s main square is Plaza Mayor, where cafes, restaurants, and shops line the arches of this grand square with Philip III’s statue in the center. This is a great place to take in the city and enjoy some people watching, if that’s your kind of thing. Right around the corner from Plaza Mayor is one of our favorite places, Madrid’s famous food market, San Miguel Market.

Here you can stop and indulge yourself in everything Iberian ham, from sandwiches to croquettes. It’s similar to the Mercado de la Boqueria in Barcelona, but with a lot more areas to hang out and eat. Here you will also find other food options such as baked goods, seafood, and sweets. A huge bonus is also that the San Miguel Market is air conditioned, so you can get out of the Madrid heat for a little bit.

Once you’re done at San Miguel Market, take the Metro to the Ibiza station and walk to El Retiro Park, a large 19th-century park with a boating lake, plus numerous fountains and statues. Within the park, you will also find the Palacio de Cristal, an 1887 glasshouse modeled on London’s Crystal Palace and housing contemporary art. The Palacio de Cristal is free to enter.

After visiting Palacio de Cristal, head a little further south to the Rose Garden of the El Retiro Park. The Rose Garden is especially worth visiting in May and June when the roses are in full bloom. Near the Rose Garden, you’ll also encounter the statue of the Fallen Angel, the only sculpture in the world dedicated to the devil which curiously enough sits 666m above sea level.

Obviously there is much more to see and do in Madrid than what we have listed here, but this was a great intro to the city. Have you ever visited? Let us know what we missed!

For ideas on what else to do while you’re in Spain, check out our post on avoiding the crowds in Barcelona.

3 Places to Visit in Bangkok