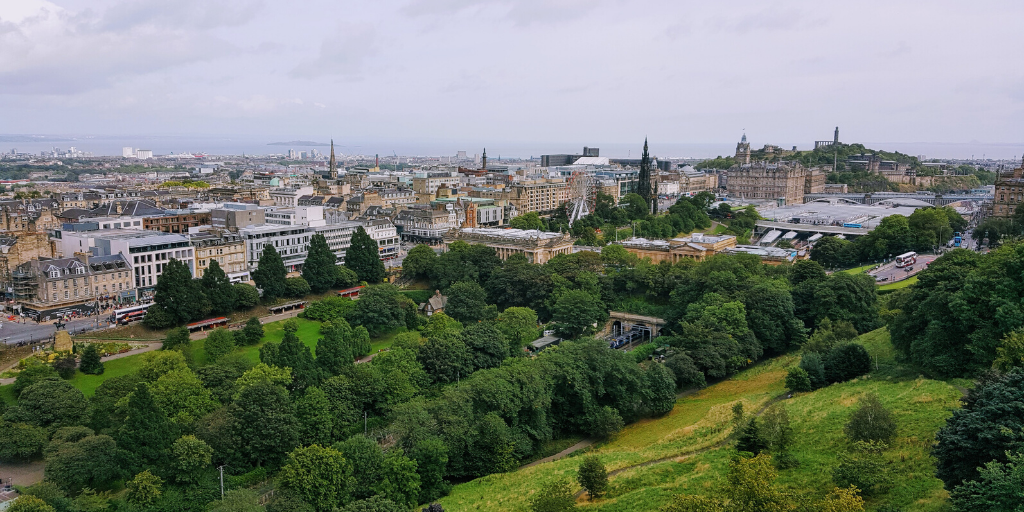 Edinburgh, pronounced ‘ed-in-bruh’ (you’re welcome), is not Scotland’s biggest city — that would be Glasgow — but it is the capital. And while there’s definitely enough to do there to warrant a longer stay, we took a day trip there from Glasgow. Here’s what you need to know about planning an Edinburgh day trip.

Arriving by train in the morning, the main train station in the center of the city is Waverley Station. From there, the Royal Mile, Old Town’s main thoroughfare, is just around the corner. The Royal Mile consists of Castlehill, the Lawnmarket, the High Street, the Canongate and Abbey Strand, runs from West to East, and is (almost) a mile long.

When you arrive, head to the Palace of Holyroodhouse at the Eastern end of the Royal Mile. At Holyrood Palace you can visit the bedchambers of Mary, Queen of Scots and see how the Queen and Royal Family are using the Palace for official engagements in Scotland. The Palace is the Queen’s official residence in Scotland.

You can purchase tickets online in advance to avoid the ticket lines, which can get pretty long during the peak summer months. Before you leave the Palace grounds, make sure to also stop by the remains of 12th-century Holyrood Abbey right next to the Palace and take a stroll through the Palace Gardens.

Directly opposite Holyrood Palace is the Scottish Parliament building. The modern architecture sits in stark contrast to the Palace across the street.

After touring Holyrood Palace, walk north, uphill to Calton Hill and its monuments. The top of the hill offers a very scenic view of the Balmoral Hotel, down Princes Street, Old Town, and Edinburgh Castle in the distance.

Edinburgh Castle is a medieval fortress that dominates the skyline of Edinburgh. Inside the Castle you will also find Edinburgh’s oldest building, St Margaret’s Chapel, established in the early 12th century.

There is a lot to see when visiting Edinburgh Castle, and you could easily spend an entire day there. If you are trying to prioritize your time, here are the top sights we recommend checking out:

Just like Holyrood Palace, tickets to Edinburgh Castle can be purchased online in advance, which will save you a bunch of time during busy days or times or year. It’s also worth noting that the annual Royal Edinburgh Military Tattoo (music festival) takes place in August.

If, like us, you’re a little hungry after touring Edinburgh Castle — or you just need a place to escape the crowds — we can recommend Leo’s Beanery, a small and cozy artisan coffee shop serving breakfast, lunch, and cakes, located three blocks north of Princes Street.

If you have more time or need an indoor activity to escape the rain (which is fairly common in Scotland), head to the National Museum of Scotland, located south of the Royal Mile or the Royal Botanic Garden north of New Town. Both activities offer free admission, however, the Glasshouses at the Royal Botanic Garden have an entry fee for adults. Art lovers will also appreciate the free entry Scottish National Gallery centrally located between the Royal Mile and Princes Street.

Have you ever planned an Edinburgh day trip? What did we miss that you would recommend?

14 Free Things to Do in NYC

What We Did on our Stopover in Doha