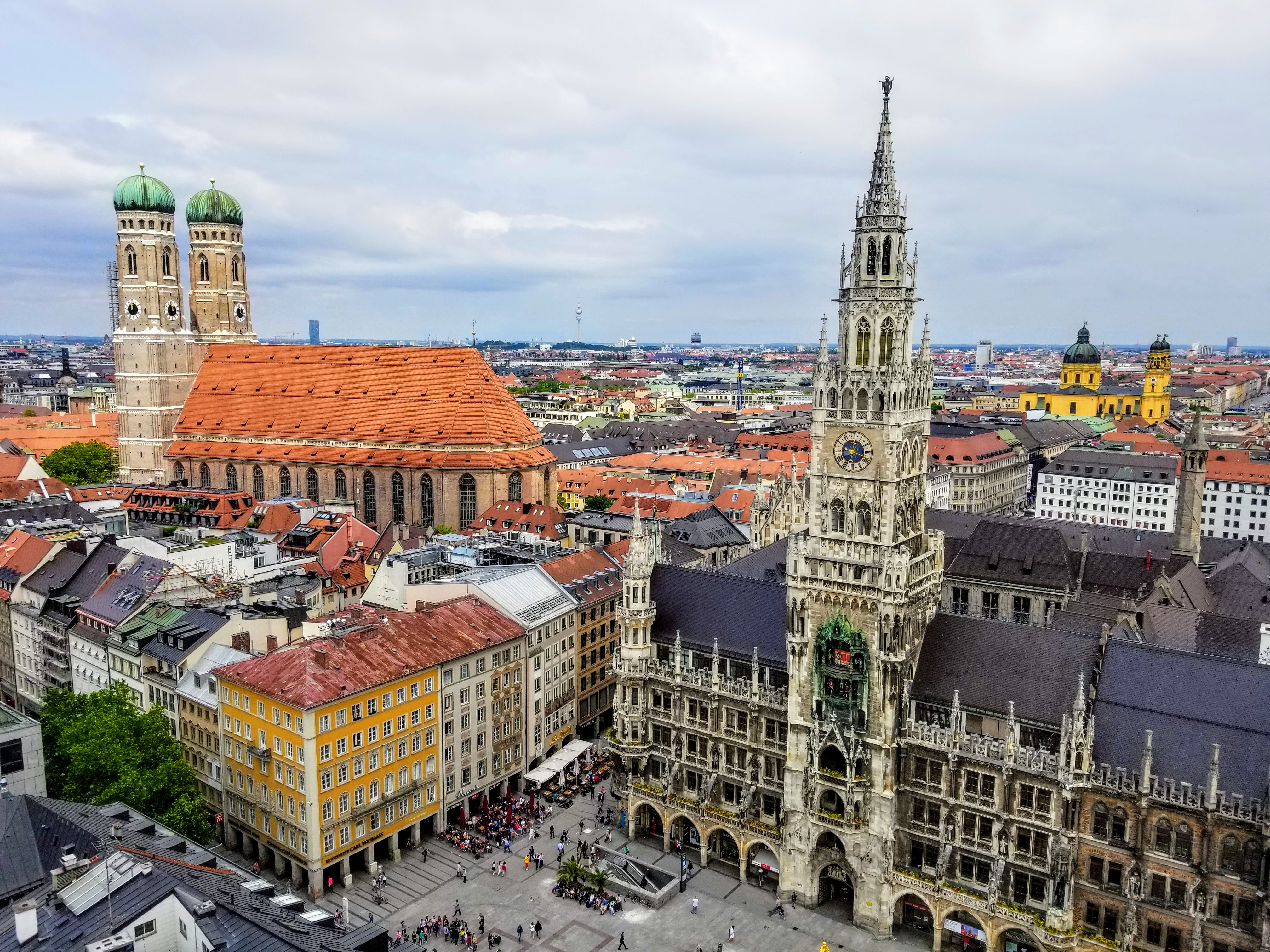 Munich, the capital of Bavaria and home to 1.5 million people, is known for many things–but above all, tourists tend to associate the city with its annual Oktoberfest celebration held every September on the enormous fairground, Theresienwiese. In fact, the first question we’re usually asked when we tell someone Daniel’s family lives in Bavaria (just south of Munich) is whether we’ve been to Oktoberfest. We have, once. Would we go back? Meh.

The truth is, while Oktoberfest is something you should probably experience once, Munich has a lot more to offer than just this one event. To get you started, here are 8 of our favorite things to do in the city.

The central square, Marienplatz, is located in Munich Altstadt (Old Town), and contains landmarks such as the Neo-Gothic Neues Rathaus (new town hall). The Rathaus’ most popular attraction is a glockenspiel show that chimes and reenacts stories from the 16th century, as well as the Altes Rathaus (old town hall).

Nearby is Munich’s oldest church, Peterskirche (St. Peter’s Church). For a few Euros you can climb to the top of the tower for a 360° view over the entire city, including Marienplatz, Neues Rathaus, and Frauenkirche (Cathedral of Our Dear Lady). Keep in mind that there is no elevator–but if you’re able to make the climb, the view is worth it. This is one of the more common views of Munich’s skyline. On a clear day, you can see all the way to the Alps, south of Munich.

If you happen to be visiting Munich in December, you can enjoy one of Germany’s biggest Christmas markets (Christkindlmarkt–or Weihnachtsmarkt in other parts of Germany) in Munich at the Marienplatz.

East of Marienplatz within the Isar River, is the Museumsinsel. This island is home to the Deutsches Museum, which is known for its extensive exhibitions on science and technology.

The great thing about Munich is that you don’t have to visit during Oktoberfest to enjoy great beer and even better food. Throughout the city there are several beer halls, including the famed Hofbräuhaus, founded in 1589. If you don’t want to drink or eat at the Hofbräuhaus and would rather sit down in a different beer hall or beer garden, then you can also just walk through the hall to take in the atmosphere.

Around the corner from Marienplatz, behind St. Peter’s Church, is Victuals Market (Viktualienmarkt), Munich’s main food market established in 1807. At the market you can find many gourmet foods, and several opportunities to enjoy beer garden style dining.

At the northern end of the Altstadt is the Munich Residenz. The Residenz was the official home of Bavaria’s monarchs from 1385 to 1918. This is a very large palace, and since the majority of it is open to the public it’s easy to spend several hours there. Make sure you plan accordingly. One of the highlights is the Antiquarium, with dozens of sixteenth- and seventeenth-century frescoes. The Bavarian crown jewels are also housed at the Residenz and can be toured with the purchase of a separate ticket or a combination ticket.

Munich’s English Garden, created in 1789, is a large public park stretching from the city center to the northeastern parts of the city with the Isar River running through the park. Popular with tourists as well as locals, the park is one of the largest urban parks in the world, bigger even than New York City’s Central Park. The park’s main attractions include two beer gardens (there’s a theme here, in case you haven’t noticed), a Chinese Pagoda, a Japanese tea house and a Greek-style temple, the Monopteros. On its southern end you can also find the Eisbachwelle, a continuous wave on the Eisbach River that attracts year-round surfers for river surfing.

Olympiapark is an area of three square kilometers (1 sq mi) that was home to the Summer Olympic Games in 1972. It can easily be reached by Metro from the city center. In the Olympiapark, you can walk to the top of the 60 meter (197ft) high hill (Olympiaberg) to get a good view of the area. If you want to have an overlook of Munich, you can take the elevator up to one of the viewing platforms of the 290-meter (951ft) high television tower (Olympiaturm). On clear days, you can see as far as the Alps located south of Munich.

Near the Olympiapark, you will also find the headquarters of luxury car maker BMW. On the campus is a museum dedicated to past and present BMW cars and motorcycles.

Nymphenburg Palace, located just west of the city center dates back to 1664 and was built as a royal summer residence. You can tour the Palace as well as the very large gardens around the Palace.

Have you ever visited Munich? What were your favorite sights to see and things to do? Let us know!

One Day in Madrid: City Highlights