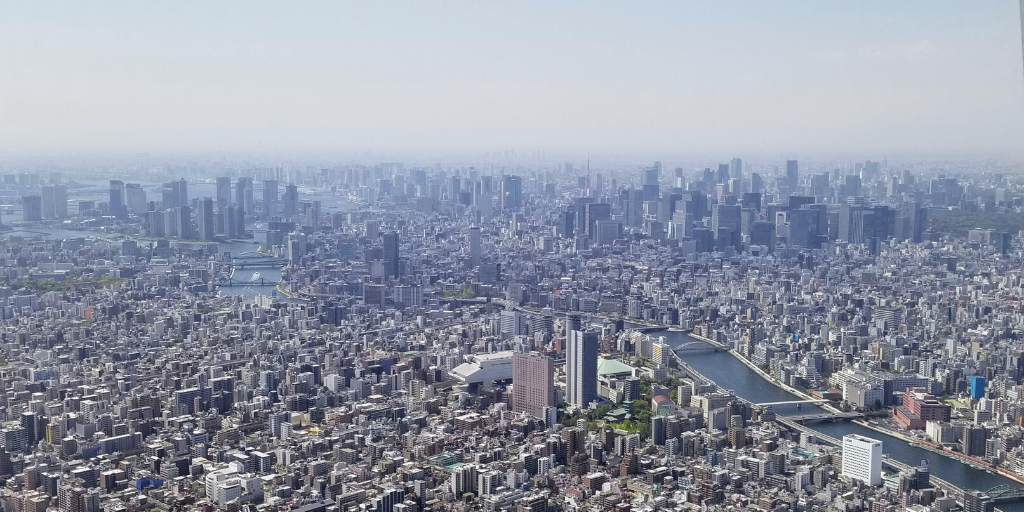 Modern Tokyo is a city of contrasts: massive yet organized, over populated yet clean and efficient. It’s well worth a visit and — for us — was one of the most interesting cities we have ever explored. That said, Tokyo can seem overwhelming due to its sheer size. So we put together this guide to planning a 3 day trip to Tokyo. It’s organized so that you can see all the major sights in each part of the city in a limited amount of time.

These days don’t have to be done in order, but this is how we would plan a shorter trip to the city. It’s also worth noting that if you are short on time but want to visit the Imperial Palace and East Gardens, you should check the respective websites ahead of time to make sure both are open and available to tour when you will be there.

Start your trip by heading the the northeast part of Tokyo to get an overview of the city from the observation deck of the Tokyo Skytree, the tallest tower in the world at a height of 2,080 ft (634 m). Tokyo Skytree is a broadcast station, restaurant, and observation tower. It’s the tallest structure in Japan and the second tallest structure in the world, after the Burj Khalifa in Dubai.

Tokyo Skytree is easily accessible through its own metro station. There is a mall located on the first few floors that you will pass through on your way to the ticketing entrance.

The Tower has two observation decks — at 350m and 450m — each with a glass floor section. Tickets for the Skytree can be purchased on the day of your visit for either deck. International visitors also have the option to buy a fast track combo ticket to visit both observation decks and skip the lines on your way to the main observation deck on Floor 350. From the top, you will have an impressive view of Tokyo and will gain an appreciation for the size of this mega city. On very clear days, you can also catch a glimpse of Mt. Fuji in the distance.

After you’re done at the Skytree, head to nearby Sensō-ji, Tokyo’s oldest temple. Sensō-ji is a Buddhist temple that is the spiritual home of Tokyo’s ancestor and was founded over one thousand years before the city itself.

You’ll notice many visitors purchasing and burning incense — it is said that wafting incense smoke over your body will cure any ailments you may have and improve health. In the streets around the temple, you’ll find ample opportunities to purchase all kinds of souvenirs. There you will also find stores that sell Kokeshi dolls, famous handmade Japanese wooden dolls.

On your second day, make your way to central Tokyo to visit the East Gardens of the Imperial Palace in the morning before taking an afternoon tour of the Imperial Palace. This itinerary can also be done in reverse if you want to do the morning tour of the palace. On your way back, enjoy the architecture of nearby Tokyo Station, Tokyo’s main train station, that first opened in 1914.

Entry to the East Gardens of the Imperial Palace is free and you do not need to sign up for a tour. The East Gardens offer a glimpse of the old defense walls, guard houses, towers of the former Edo castle, and plenty of flowers and trees.

The East Gardens are closed every Monday and Friday, as well as on special occasions (exact dates and times are listed on the garden’s website). It’s also worth stopping in the Museum of the Imperial Collections within the East Gardens. Admission is also free and the museum displays gifts that were given to the Royal couple from other countries around the world.

If you want to see the outside of the Imperial Palace and its immediate surrounding area (the interior of the palace is off limits to the public as the Emperor and Empress reside there), you can join a free tour conducted by the Imperial Household Agency. Make sure to check the calendar of the Household Agency for dates when tours are offered. Tours are never offered on Sundays, Mondays, or special occasions.

There are two ways to obtain a tour ticket: 1) the first 300 people will receive tickets on a first-come first-serve basis and 2) 200 advanced reservation tickets are available per tour. At most, tours are offered twice per day at 10 AM and 1:30 PM, lasting 75 minutes.

We would highly recommend trying to reserve your tour tickets in advance to make sure that you can definitely go on the tour. Reserving ahead of time also saves time, as otherwise you will need to fill out a registration form with your name and passport information on the day of your visit. Applications to tour the palace are accepted from 5:00 AM on the first day of the month preceding the tour date.

On your last day, head to western Tokyo to enjoy people watching, shopping, and a little professional baseball.

Make sure to stop at Shibuya Crossing, the busiest intersection in the Japan (and most likely also in the world) and is a great representation of modern Tokyo. The intersection is all at once extremely busy, and yet very orderly and efficient. With every traffic light change, people from all directions cross the street at the same time — making for some pretty great photo opportunities.

After checking out the crossing, head to Takeshita Street, the best place in the city for shopping and people watching.

Once you step into the narrow Takeshita Street, you immediately feel like you are part of a slow moving river of people. There are tons of shops for grabbing souvenirs or something to eat.

If you have time and the schedule permits, we recommend catching a baseball game at Meiji Jingū Stadium, first opened in 1926. The stadium is home to Tokyo’s underdog professional baseball team, the Tokyo Yakult Swallows, and seats close to 38,000. While the Yakult Swallows’ record pales in comparison to Tokyo’s Yomiuri Giants, the Swallows’ fan base is extremely loyal and energetic.

When we were in Tokyo we were able to attend a Swallows game against rival Yomiuri Giants. Unlike what we have experienced with American baseball, both groups of fans were extremely polite to each other. Make sure to keep an eye out for the “beer girls” that go around the stands and serve cold draft beer from the keg on their back. We also enjoyed the traditional Swallows ‘umbrella dance’, where they use a small open umbrella and bounce it up and down to create a wave whenever the Swallows score.

You can reserve your tickets online and then pick them up at the will-call window before the game. Just make sure you are bringing your confirmation e-mail and ID. You are allowed to bring both food and water into the stadium.

We hope this ‘3 day trip to Tokyo’ guide is helpful for planning a short trip to Tokyo. If you have more time, we also recommend checking out the Tokyo National Museum, Ueno Zoo, Tokyo Disney, and Toyosu Fish Market. You can also catch either an entire play or just a single act of traditional Japanese kabuki theater at the city’s premier Kabuki-za Theater. Keep in mind that the theater only accepts cash if you want to drop in on an act or two.

Have you been to Tokyo? What was your favorite part and which sights would you recommend?

Kuala Lumpur: What to Do When You’re There

The Best Attractions in Singapore

What We Did on our Stopover in Doha